Reunion of Czech Torah Scrolls from Susice on April 22, 2012

On April 22, 2012,  a remarkable event occurred when 7 Czech Memorial Torah Scrolls were reunited in a special service at the Jewish Center in Princeton, New Jersey.

Seven sacred Torah Scrolls from the town of Susice, Czechoslovakia were brought together from locations all around the United States.

They are 7 of 1564 Scrolls that miraculously survived the Holocaust, restored by the Czech Memorial Scroll Trust in London, and sent to Jewish communities around the world to serve as a precious link to centuries of Jewish life lost in the Shoah.

The Czech Scrolls Trust sent us a link to this video for our congregation.

Click the link (below) to watch the video directly on You Tube:
http://www.youtube.com/watch?v=JX5BO-Xc80o&feature=youtube_gdata_player 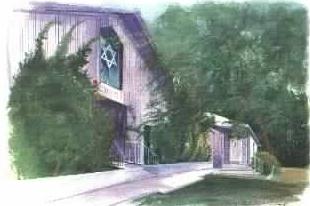 a. Should be installed on the right side of the door jam as you enter - approx 2/3 up (from the floor), with the top of the mezuzah angled towards the inside.

b. Say the following prayer surrounded by friends and family.

2. Click the Play button (below) to listen to the  BarChu for Shabbat Services

3. Click the Play button (below) to Listen for the Blessing for the Shabbat Candles